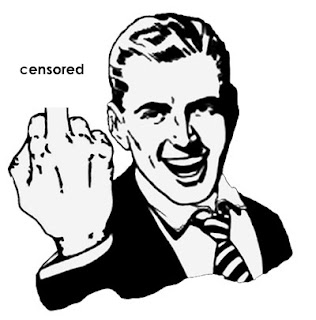 hahaha.. that makes me laugh.

I recently read the following on a tweet from a person I follow. She was a Big Fat Loser contestant and then a trainer I know sent the reply:
Tweet 1: "Ever wish, u could just tell some1 2 smile - shit ain't that bad."
Tweet 2:: "I wish that all the time. If they'd smile they'd feel so much better evn for a minute"

Yes, folks...these are the same people, I'm SURE, that would tell a someone who suffers from depression to "buck up" or "snap out of it" etc. It infuriates me. I don't think they would tell a diabetic to not take their insulin, but instead, "wish real hard to get your numbers up" or "just eat sugar and make your body adjust".

I wanted to reply to them both "F&*# o&&!" but that wouldn't be nice, nor would it do anything to help my case. By and large, people don't get it. Shit, I don't get it. I hate battling depression, irritability and all the other crap bipolar disorder dishes out to me. There are things I can do, and I try to do them, to help stave off a depressive crash, or a manic episode (which in me, now manifests as anxiety & irritability). But, there are also things out of my control, and I just have to ride it out the best I can, keeping damage to those around me at a minimum. Sometimes that means I don't talk much, I withdraw and don't engage. But it doesn't mean I can check out of life and not drop off/pick up kids from school, go grocery shopping, meet with the women I pray with or exercise (which actually helps my symptoms).

And so, if I am doing these things, and in a lousy place, your telling me to "smile!" just makes me feel worse. Don't you think I would rather be "up" and happy and positive and feel like smiling? I think that other people think that I want to be like this, or else I would snap out of it. Bullshit my dears, bullshit.

The last time this actually happened, I was in the mall (I'll save that post for another time) walking alone, minding my own business. I had my plain face on - meaning I wasn't actively posturing my mouth to curve up at the sides, not so much in a smile, but so it wouldn't slightly turn down as it naturally does. A young man with a small group on friends said simply, "smile!" I didn't say anything but continued on. However, it caused me to think of the response I'm dying to use for the next unsuspecting stranger:
"If I weren't grieving having to bury my husband a few days ago, I might"

Now that actually makes me smile!