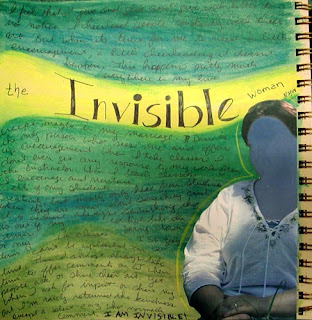 I really don't want to play victim. I also seem to have shit happen to me all the time.
I can't figure out how to reconcile the two.

I have been feeling particularly invisible lately. It's sort of a recurring theme. I don't know if it's because my tolerance is down & irritability is up, or if it's happening more or what, but I'm sort of at the breaking point.

I backed WAY off facebook...just to see if anyone would notice. (I held off singing the "Everybody hates me, Nobody likes me, I think I'll go eat some worms" song for now.) It took 3 weeks before anyone noticed, or at least said anything to me. I had a couple people leave me messages, but only one person was even someone I'd consider a friend vs. a "facebook friend". It's just sort of telling I guess.

The one friend that commented said that she fbooked for herself. I agree somewhat. I mean, I think we all do. But isn't that the point of facebook? to "connect" even on a limited, narcissistic, techno level? But I will also say that if I let loose with a little honesty, it's the people I'm closest to that are the first to chastise me for what I've said.

I have held back so much - even this blog. I keep it anonymous, not as much for me, but because I want to feel like I am able to be completely honest without hurting others. Honest doesn't necessarily mean I want to be mean, but sometimes it may come off that way. But it's my truth. How things make me feel without having to tiptoe around others.

Here's a great example. My mom is divorced. (I can hear the universal gasp at such a novel and shocking revelation) From what I know (and it's not a lot) she married young, he was an alcoholic and abusive and she finally left him. But the way it was put to me, was that she stayed with him, but vowed that if he ever hurt me, or became a threat to me, then she would leave. This sounds valiant on one level, but it was clear when it came up, that it was my fault she became a divorcée. I remember asking her a couple of times about him. Her posture would stiffen, as would her face and mouth. She would dole out very little information, and more than answered questions about who I was, the message that came across loud & clear was that I should not be asking such things. That I was causing her great pain and suffering by even bringing it up.

This all leads to a whole slew of things not to breathe a word about. I mean I have a sister, but when I've had people casually mention how we don't look alike, or when conversations of my heritage come up, well, we just don't talk about such things.

I decided not to lie or be secretive with my kids though. I mean, my mom's shame is hers to carry around and I'm trying to to help her schlep it any longer. I want to be sensitive, but honest. I can't remember how it first came up, but kitten asked or said something to which the answer was that Papa wasn't my birth dad. Shocking, yes, but I answered what she asked very nonchalant. No shame. For heaven't sake, I didn't do anything but be born!

Ok, so yes, I've digresses far off topic. But that was a deep vein of an answer to facebook. As far as the invisibility, the thing that set me off tonight was dinner. Dinner I had spent 1 1/2 hours cooking. Meatballs that I haven't had for years because I am allergic to wheat and eat gluten free. (Meatballs have breadcrumbs) I served my husband, and then the kids filled their plates. There were literally (and I mean really & truly literally - not the exaggerated "literally" that is not at all literal but still overused by people as if it were) 8 pieces of spaghetti left for me. (brown rice spaghetti of course). WTF?!? And let me preempt your attempt to make me feel better by reassuring me that they must love my cooking and therefore were filling up. EVERY other time (again - literally every other time) I make a pound of spaghetti and there is plenty left over.

It goes beyond just being careless or rude. This doesn't happen to my husband, or the kids to each other.

It's like I don't exist until someone needs a ride, or the parental control password on the Wii or computer.

So now I'm in my room, writing. Of course once they offered to put stuff back so I could eat, I chose the ever so mature martyr route. This is what I'm talking about. I don't want to play victim, but I am so damn hurt.