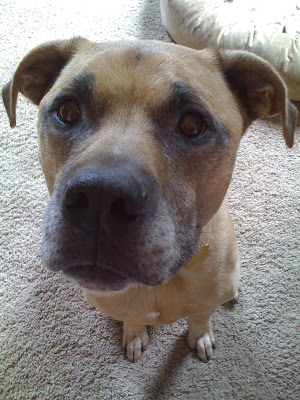 Such a sweet face, and a sweet dog.

Except when other dogs are around.

We picked out Bodhi from the pound 9 1/2 years ago.  We could always remember how old he was because he was about 6 (human) months younger than our third child.

And then somehow, he got the notion that our house needed protecting from the strangers & their dogs walking by.

A couple of years ago there was a man walking his dog past our house.  Unfortunately, the front door had been left open and Bodhi bolted out, running straight for the other dog.  Being the smart, level-headed cookie that I am, I got in the middle to pull him away and back into the house.

This was a wake up call.  All the what-if's came into play.  What if he bit the dog or owner, what if it had been a kid, what if they sue us...
Praise God nothing happened, except that we pursued a dog trainer who specialized in dog aggressive dogs.

After working with the trainer, who came to our house, and working with Bodhi ourselves, we certainly saw improvement. He listened better, we knew more about dog posturing, etc. The trainer even opened a boarding/day care facility and we would use them for boarding when we went on vacation.  He loved it! He would play and have fun with the other dogs, but he still wanted to be the boss of them.

All the boys (now 10, 8 & 5) would ask to take Bodhi on walks. I couldn't let them. He's around 70# and quite strong. He is also unpredictable since he may see another dog and still want to be the boss of them.

We have had numerous talks with the kids, even one just last week, about leaving the front door open. Coming home from school (or anywhere for that matter) Bodhi waits for us to come in and loyally greets us as most dogs do.  Waiting for 4-5 people to make their way in from the driveway, the door often gets left open a crack.  I've had to explain over & over how important it is for us all to close it all the way.  All the "what if's" come out again.

I've had to explain what suing means and how people will sue. And IF Bodhi ever went after another dog, the one side is that people can get hurt really, really bad. He never has gone after a person, but if a person is in the way of him "fighting off" another dog on "his property", there's always potential for a person to get hurt, especially if there's a child around.  The other side of course, is that we could lose everything.  The house, the business...

We have talked a lot about it.  But nothing prepares you for the real thing.

Tonight, somehow Bodhi got outside.  We were inside with some people and our oldest son came into the dining room saying someone was at the door for Dad.  It was our neighbor.
The story she related to him was that when she walked her dog past our house, Bodhi ran up to "attack" her dog. She was screaming enough that a bunch of neighbors came out.

After my husband talked with her and came back inside, we both just knew.  That was the final straw. At that point, Bodhi became too much of a liability. Not just to us, but potentially to dogs & their owners outside.  If he wanted to kill the dog, he very easily could have.  It wasn't that - it was pure dog bullying. We knew we needed to give him away to people who could take care of him, and that would.

I called the woman we had worked with for training. She said they would take him in. Her business partner was actually in our area and would pick him up that night.

We called the kids to the dining room for and explained how we had to give him up. You can imagine the tears. Crying, wailing, screaming.  It was awful and it wasn't just the kids. But it was right.

About 1/2 hour later, Bodhi's sweet friend came to pick him up. He was so excited because he thought he was going on vacation to go play. And for him - it probably was.  He will be in a safe environment with people who love him.  The silver lining is that in a couple weeks, they are updating their website with webcams so we will be able to see him, and we can plan visits to go be with him as well.

Our neighbor is ok, as is her dog.  They were both scared, but we have done our best to listen to her, validate her feelings, reassure her that Bodhi was current on his shots. (He scraped her leg with his nails as he was barking over her dog.) And of course we paid for her emergency vet bill.